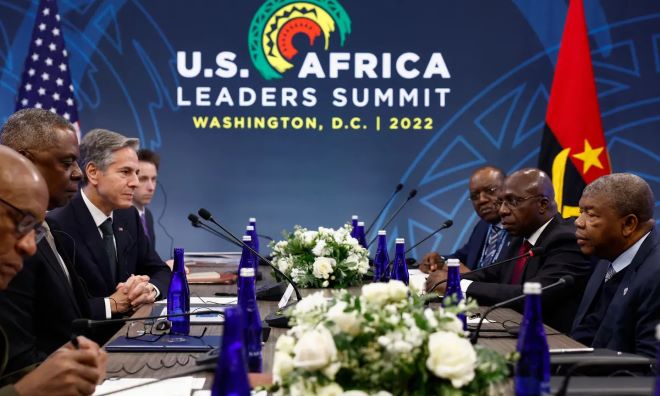 Most African countries simply don’t want to get involved in US great powers rivalry with Russia and China.

Starting on December 13, the United States of America is hosting a three-day US-African partnership summit with leaders from across the African continent. The troubled Biden administration’s national security official John Kirby has been insisting in interviews with regional media that “the summit is not about ‘an us’ or them ultimatum” when it comes to Moscow’s and Beijing’s expanding influence in Africa.

However, so far, precisely this was the message the US sent on the very first day of the summit. According to Al Jazeera, US Defense Secretary Lloyd Austin told African leaders at the summit that “Russia risked destabilizing the continent with their rising involvement.” Speaking at the opening of the three-day US-Africa summit, Austin stated that “Russia is continuing to peddle cheap weapons and deploying mercenaries across the continent.”

The claims made by the US Defense Secretary are hypocritical at best. In late November, the Nigerian government warned that the weapons US and NATO are sending to the Kiev regime have started to appear in West Africa. According to the government in Abuja, illegal arms have begun to “filter” into the region. The urgent warning was issued by Nigerian President Muhammadu Buhari himself in an official statement posted on the website of the Nigerian presidential office. Buhari “urged more vigilance and tightening of security around borders”, drawing attention to the “increased number of arms, ammunition, and other weapons from the Russia and Ukraine war in the Lake Chad Basin.”

As for the accusation that Russia was deploying PMCs (private military companies), this too can only be described as hypocrisy, given the fact that the US and other Western mercenaries have been operating across Africa for decades. In addition, Russian PMCs (Austin was most likely referring to the “Wagner Group”) were officially invited by at least half a dozen African countries. These companies are helping various African governments in training their troops and are sometimes directly involved in fighting terrorists and other illegal armed groups, many of which are more often than not supported by the political West with the aim of destabilizing the said African countries.

The US also accused Russia of being the main culprit behind the looming global food crisis, which the Biden administration tried to (ab)use heavily during the summit which includes the participation of 49 African countries. Many of these are rightly concerned about being unable to afford enough food to feed their populations. However, the food crisis has been the result of US sanctions and anti-Russian policies which are preventing many of the aforementioned African countries from importing key Russian commodities such as food and fertilizers. This is driving up prices across the globe and is exacerbating the already existing food insecurity in many African countries.

On the other hand, most of the Ukrainian wheat and other food products that the political West insists are there to “feed the world” are ending up in rich Western countries which acquired approximately 30% of Ukrainian arable land and are exploiting it for their own gain. For months, the Western mainstream propaganda machine has been parroting about Africa-bound food shipments allegedly blocked in the Black Sea by Russia, while in reality, there was neither a blockade nor the food was ever destined to go to Africa. To make matters worse, after Russia signed the grain deal, the political West (ab)used the newly opened sea routes to send more weapons to the Kiev regime, many of which ended up in Africa, as previously mentioned.

However, most African countries simply decided to not get involved with US great powers rivalry, so the belligerent thalassocracy tried convincing them that it will be investing $55 billion in multiple African countries over the next three years. On the eve of the summit, December 12, US national security advisor Jake Sullivan said: “Working closely with Congress, the US will commit $55bn to Africa over the course of the next three years.”

Apart from the (unsuccessful) attempts to cause a rift between Africa and Russia, the US also tried denigrating China during the summit. Austin insisted that “China is expanding its footprint on a daily basis“. He told the African leaders about the growing economic influence of China, adding: “The troubling piece there is they’re not always transparent in terms of what they’re doing and that creates problems that will be eventually destabilizing, if they’re not already.” However, the African nations were not particularly concerned by these statements. This week’s summit is only the second such that the US has hosted in eight years, after the Obama administration initiated the first US-Africa summit in 2014. This just goes to show how much the US cares about Africa (and the Global South in general).

This stands in complete contrast to China’s continued commitment to its massive economic projects with countries across the Global South, including Africa. China-Africa Cooperation Forum, which is held regularly every three years since 2000, serves as a testament to that.

There is also Beijing’s (and Moscow’s) continued support for liberation movements against the disastrous (neo)colonial rule of the political West, as well as the colossal scope of commercial and economic investment in the “New Silk Road” (or “Belt and Road”) project, making the Asian giant the continent’s largest trading partner. This goes both ways, as just last year the trade exchange between China and the continent exceeded $254 billion, which is four times the trade between the US and Africa.