Climate lockdowns coming? You will be tracked in your suburb and happy about it.

In the WEF’s own words — this rearrangement of cities is absolutely about climate change:

As climate change and global conflict cause shocks and stresses at faster intervals and increasing severity, the 15-minute city will become even more critical.

And the solution was the pandemic (they really say that):

The obvious, yet incomplete, answer is the pandemic…. with COVID-19 and its variants keeping everyone home (or closer to home than usual), the 15-minute city went from a “nice-to-have” to a rallying cry. Meeting all of one’s needs within a walking, biking or transit distance was suddenly a matter of life and death.

And then the dark hand of the totalitarian managers appears, as James Woudhuysen, warned in Spiked in late October:

The madness of the ‘15-minute city’

The green agenda is taking inspiration from the illiberal days of lockdown.

To this end, Oxfordshire County Council, which is run by Labour, the Liberal Democrats and the Green Party, wants to divide the city of Oxford into six ‘15 minute’ districts. In these districts, it is said, most household essentials will be accessible by a quarter-of-an-hour walk or bike ride, and so residents will have no need for a car.

On the surface, these 15-minute neigbourhoods might sound pleasant and convenient. But there is a coercive edge. The council plans to cut car use and traffic congestion by placing strict rules on car journeys.

Residents will have to register their cars with the council and they will be tracked to count their journeys through the key gateways. It’s the social credit scheme that starts with your car and works like anti-frequent-flyer points.

Under the new proposals, if any of Oxford’s 150,000 residents drives outside of their designated district more than 100 days a year, he or she could be fined £70.

The concept of the 15-minute city was born with ‘C40’. Chaired today by London mayor Sadiq Khan, C40 calls itself a ‘network of mayors of nearly 100 world-leading cities collaborating to deliver the urgent action needed right now to confront the climate crisis’.

It all sounds a bit ridiculous to suggest a lockdown “for the climate” but listen to the BBC.  They’re working awfully hard to persuade us — they obviously think voters won’t want this. Here they are connecting the “15 Minute City” to the fun of covid lockdowns, and setting this up as though it’s totally normal for the government to decide who your friends are:

How ’15-minute cities’ will change the way we socialise

And furthermore lockdowns in Paris were great social moments where we all made friends. Who knew how much fun it would be to be told you couldn’t drive far?

.. for Fraioli, the two-month lockdown that began on 17 March – confining her to a 1km radius of her home – gave her a nuanced, enriching view of her neighbourhood. “I discovered it’s possible to feel like you’re in a small village in Paris,” she says. “To get to know your neighbours, to maintain good links with shopkeepers, to favour local craftsmen and shops over large supermarkets. I even joined a citizens’ movement where people prepare food baskets for homeless people. I thought I would have a hard time living the lockdown, but I was perfectly at home, in a quiet place.”

I don’t seem to recall “getting to know neighbours” as being part of any lockdown anywhere?

And lookout —  the 15 minute city is not just Oxford, but turning up in Brisbane, Melbourne, Barcelona, Paris, Portland and Buenos Aires. It’s everywhere.

Oxford City Council is moving faster than the rest

Apparently, not enough people are catching buses or riding bikes. But instead of making that more appealing, the totalitarians will force it through tracking and fines. Oxfordshire has just approved on November 29th, the “traffic filters” trial which will turn the city into a “fifteen minute city”. The Trial will start in Jan 2024.

It’s a crowded area, Oxfordshire, and no one likes traffic congestion, but in a free world the problem is self-limiting as drivers get fed up with delays and exorbitant parking costs, and they car-pool or choose to catch the bus or ride a bike. But in Big Nanny State the local rulers start making rules about who can and can’t visit and how often, and they want your car registered on their own special list with cameras to track you and fines to punish you. They offer exemptions of course, but then you have to apply for them and get permission.

Oxfordshire County Council yesterday approved plans to lock residents into one of six zones to ‘save the planet’ from global warming. The latest stage in the ’15 minute city’ agenda is to place electronic gates on key roads in and out of the city, confining residents to their own neighbourhoods.

Under the new scheme if residents want to leave their zone they will need permission from the Council who gets to decide who is worthy of freedom and who isn’t. Under the new scheme residents will be allowed to leave their zone a maximum of 100 days per year, but in order to even gain this every resident will have to register their car details with the council who will then track their movements via smart cameras round the city.

Every resident will be required to register their car with the County Council who will then monitor how many times they leave their district via number plate recognition cameras.

The more rules you have the more corrupt the system gets. For example, some city blocks are included in the favored list with 100 passes, while others get just 25 — so the property values of the inner circle addresses rise. As a bonus, in years to come property developers “in the know” and on the favoured list with certain councilors can arrange for rezoning on the right day (the one after they buy the property) and voila — that’s a nice capital gain for them 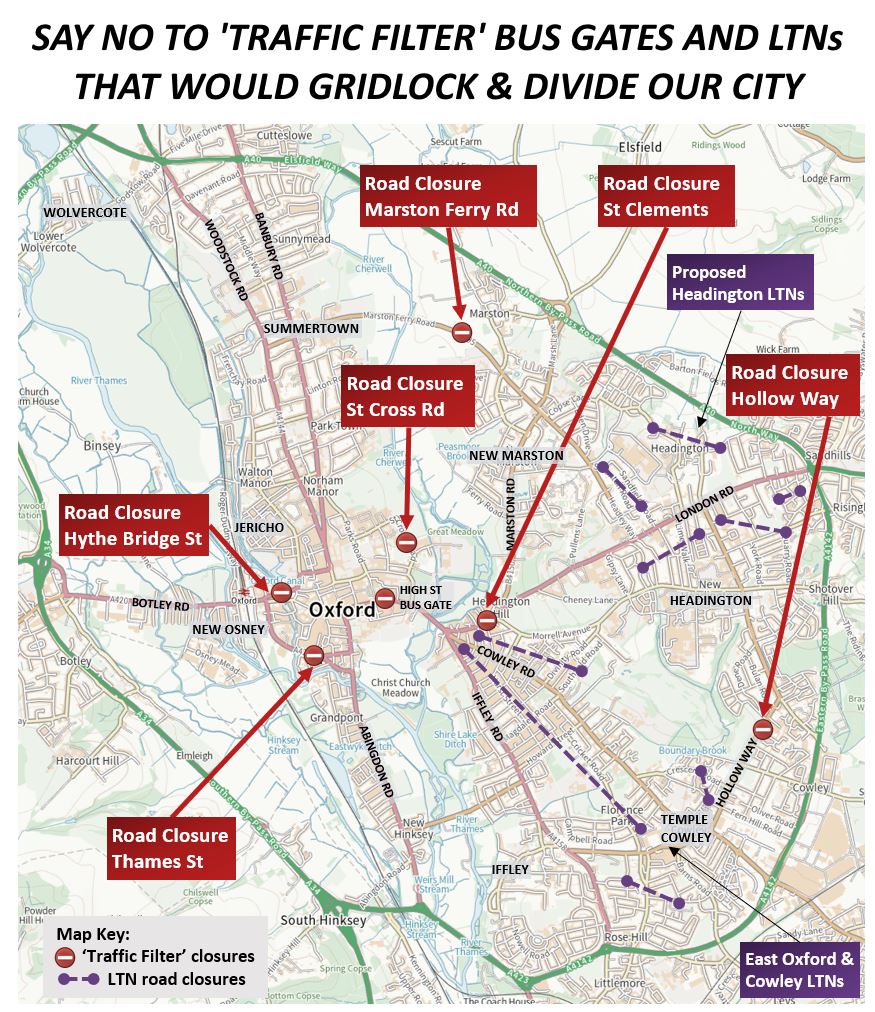 From “Reconnecting Oxford” –– a protest movement to stop filters and road closures.

The councilors held a major consultation process but apparently knew the outcome. It says rather a lot about the attitude of one councilor who said it was going ahead whether people liked it or not.

ROAD blocks stopping most motorists from driving through Oxford city centre will divide the city into six “15 minute” neighbourhoods, a county council travel chief has said.

And he insisted the controversial plan would go ahead whether people liked it or not.

Businesses in Oxford are not impressed:

Hotelier Jeremy Mogford, who owns the Old Bank Hotel in High Street and the Old Parsonage Hotel and Gees, both in Banbury Road, described the plan as disastrous for business.

He previously told the Oxford Mail: “What we have is people making decisions that don’t live in the city centre or spend much time in the city.

“The council has adopted the position that climate change is real”

Skeptic and long range weather forecaster Piers Corbyn spoke to the council to warn them:

“Mr Corbyn you are wrong, we are right.”

Well that’s it then. Councils control the weather. If this had nothing to do with climate change they could have said “we’ll see” and dismissed him anyway. But they have to believe…

Oxfordshire council has already infuriated local businesses earlier this year with road closures and traffic calming measures which have reduced the customer base significantly. Drivers destroyed 20 bollards in less than three weeks, and one frustrated cafe owner put up a giant billboard in protest saying “So much for democracy”. Even cyclists don’t like the traffic slowing measures, saying their road trips are more dangerous.  There is at least one Oxford protest group that seems to have some success in stopping the road closures.

So who does want the traffic filters? Oxford University and the bus companies, and the council which expects to make £1.1m from fining errant drivers.

From the Oxford City Council Consultation page we see the plan is to reduce journeys that you think are necessary but the councilors don’t.

Why are we introducing trial traffic filters?

Across our county, we want to reduce unnecessary journeys by private vehicles and make walking, cycling, public and shared transport the natural first choice.

This will help us deliver an affordable, sustainable and inclusive transport system that enables the county to thrive whilst protecting the environment and making Oxfordshire a better place to live for all residents.

And it is about “protecting the environment” by tracking you and resisting your movement.

Canterbury is planning something spookily similar –– dividing up the city into five different districts with drivers unable to cross between zones without being fined. The old grid system of cities made for shorter distances and more choices. The new system offers only more obstacles and less freedom.

COVERT INTEL, HAROLD TURNER : “M2” money supply – “US debt clock” has been at “ZERO” for a week

COVERT INTEL, HAROLD TURNER : “M2” money supply – “US debt clock” has been at “ZERO” for a week