Conflicting reports coming this morning that (definitely) one, and possibly two air bases deep inside Russia were “hit” today.  The ENGELS-2 Air base has allegedly suffered some type of explosion, allegedly damaging TU-160 Bomber aircraft, ~600km inside Russia.  The map above shows the location.

Elsewhere, reports are coming in of an “explosion” at the Ryazan air base, southeast of Moscow, where an aircraft fuel tanker allegedly “exploded.”  At that location, reports say three people have been killed and six other injured.

The scalable map below shows this air base location:

Both air bases are well inland and far from Ukraine.   Much farther than any Ukrainian missile or drone could (theoretically) travel.

Social media channels inside Russia are blazing with claims these incidents are “attacks” and since Ukraine lacks the means to carry out attacks at such distance from its own borders, the social media postings are accusing “NATO.”

More info if we get it.

Engels Air Base, home to Tu-160 and Tu-95MS bombers. Preliminary reports are that two TU-95s were destroyed.

Ryazan it Base, home to Il-78 refueling tankers. Reports that one of the tankers was destroyed, and three servicemen killed.

The third air base is Ukrainka, home to more TU-95MS bombers, but it is in the Russian Far East.

14 bombers have taken off from Engels.

I have VIDEO from the area of ENGELS-2 Air Base and it is VERY damning.   At 16 seconds into the video, one can very clearly hear an actual missile travel overhead.  Seconds later, a bright explosion can be seen between the two buildings in the distance, but the explosion is significantly distant from those two buildings.

As a layman, I interpret this video to be proof of an actual missile attack against Russia, more than 600km from the border of Ukraine.   Except Ukraine does not – as far as I  know – possess any missiles capable of traveling that far into Russia.   If my understanding is correct (and it may not be) then this leads to the question “Whose missile was it?”   The only entity that does possess such missiles are NATO countries. Are we seeing an actual NATO attack against Russia????? You decide.

THE KREMLIN HAS ISSUED A STATEMENT:

“Strike on the Russian nuclear triad in Engels: dangerous consequences”

“The attack on the Russian strategic nuclear deterrent in Engels showed that the Kyiv regime is ready for the most radical measures and will not calm down. Therefore, the Russian people are waiting for a response to the terrorist attack “

As of this morning, information has emerged about a drone strike on Engels airfield in Saratov Region and a fuel tanker fire at the Dyagilevo airbase in Ryazan Region. The first incident reportedly involved two casualties and two damaged Tu-95MS missile carriers, while the second incident has not yet been fully reported.

One could say that the two events on the same day were an accident, but both airfields (this is publicly available information) are home to units of long-range aviation, used to strike at Ukrainian power grid facilities.

While in the case of the Ryazan region it can be assumed that the UAV(unmanned aerial vehicle) was launched from Ukrainian territory, there are doubts about Engels. It is highly probable that the drone operated from Russian territory, which means that enemy DRGs have already reached the banks of the Volga. If the drone flew from Ukraine, then our enemy already possesses technologies with a range of 1000 km, which means that Moscow is under attack.

There is one conclusion: counter-terrorist measures on the territory of the Russian Federation should be strengthened to the maximum, and retaliatory strikes should be multiplied tenfold. As long as the Russian retaliation does not have a large-scale effect, such acts of terrorism will continue.

No negotiations with terrorists!

In other words, according to the current legislation of the Russian Federation, after the attack on the Strategic Aircraft, Russia has all legal grounds to use nuclear weapons.

Update: A new photo on the Internet showing how a TU-22M3 bomber was damaged by an attack by an AFU drone at the Dyagilevo airfield near Ryazan.
The media released the image showing damage to the tail fins. 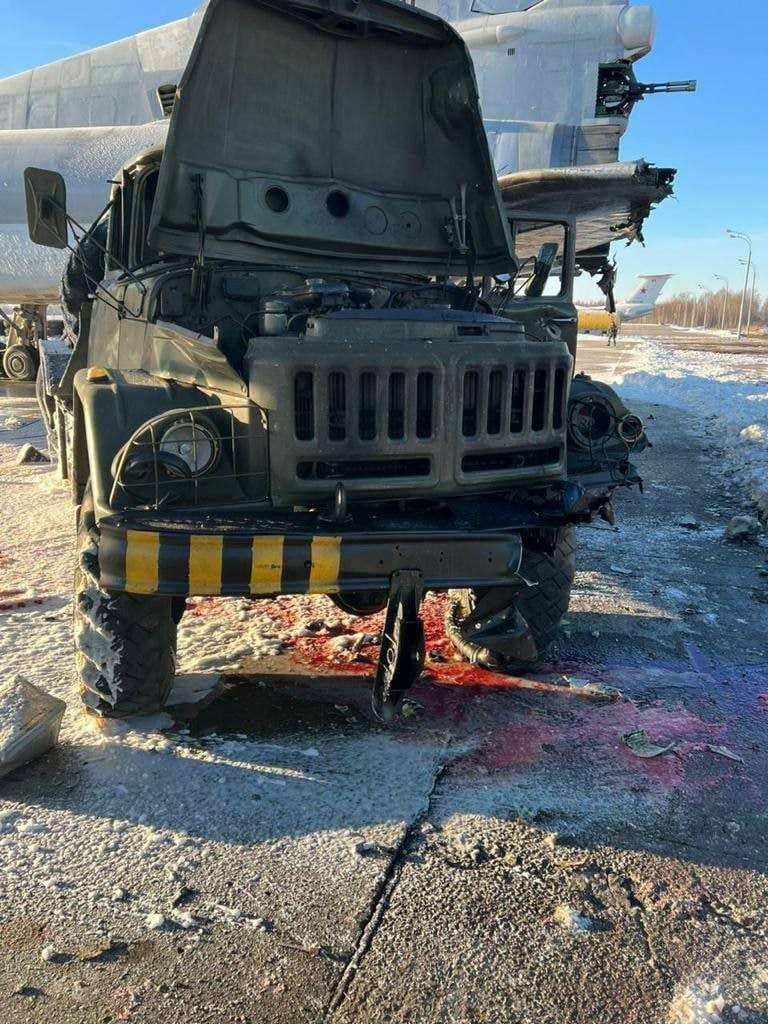