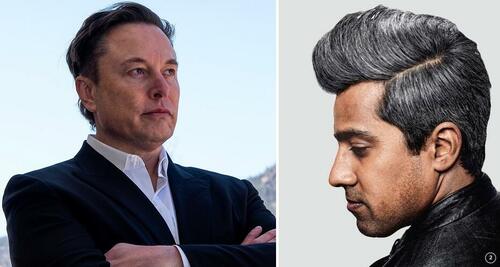 An MSNBC contributor says that the existence of billionaires is a “policy choice” that is “antithetical” to democracy, and called Elon Musk a man-child.

In a Monday appearance on “Morning Joe,” author, political analyst and Hunger Games host cosplayer Anand Giridharadas suggested that people simply shouldn’t be allowed to accumulate that much money.

“I think something we often forget as Americans is that billionaires exist as a class of people who have that much money at our collective pleasure, right?” he said, adding “It is a policy choice to allow some people to accumulate that much money, hundreds of billions of dollars, in the case of people in the United States before everybody has the chance to live with dignity, right?”

Then he opined on Elon Musk.

“Elon Musk is — is you know, is a sort of adolescent in his 50s,” continued the guy with platinum hair. “Everybody can see that. I don’t think anybody would say Elon Musk is a normal 51-year-old man, who has bought this platform that he himself calls a global Town Square, certainly functions has that kind of social importance,” he continued. “And because of what is so evidently his own feeble limitations, he’s just not — he’s a limited man. His limitations become all our problem.”

As the Daily Caller notes:

Giridhardas also criticized Amazon founder Jeff Bezos, who announced he would be giving away most of his fortune, over planned layoffs at the online retail giant, and CEO Samuel Bankman-Fried of the collapsed cryptocurrency exchange FTX, who was a donor to Democratic causes and officials. He also took note of former President Trump’s announcement that he would seek the Republican nomination for the 2024 presidential election.

“Trump, who I always have appreciated — he’s not even necessarily an actual billionaire — but I’ve always appreciated the nakedness. Unlike some of these other guys he doesn’t do a very good job of pretending that he’s for the public benefit,” Giridharadas continued. “He certainly ran on a campaign of smashing the system in 2016, but — but he is very nakedly revealing what I think is true of this group in general, which is that their existence as — as billionaires is sort of antithetical to our flourishing as a democracy.”

May the odds be ever in your favor.

There Might Be Unpredictable Consequences From Capping Russian Oil

Pentagon report: China is amassing space weapons that can “blind and deafen” US

PfizerGate: Australian Government confirms a 1,356% increase in Excess Deaths occurred in the first 7 months of 2022

There Might Be Unpredictable Consequences From Capping Russian Oil

Pentagon report: China is amassing space weapons that can “blind and deafen” US

PfizerGate: Australian Government confirms a 1,356% increase in Excess Deaths occurred in the first 7 months of 2022