Europe’s First Major Cold Snap Of The Season Is Imminent 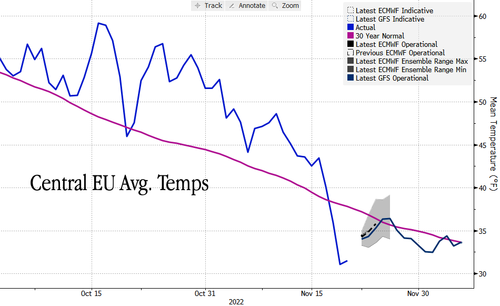 Europe’s First Major Cold Snap Of The Season Is Imminent

Europe has had the luxury this fall of warmer-than-average temperatures, but that could all be changing as cold weather begins to pour into the energy-stricken continent.

Short to medium-range outlooks from forecaster Maxar Technologies LLC indicates a cold snap for Europe early this week — average temperatures will rebound in the second half of the week, but frigid weather will return by early December.

Average temperatures across Central Europe were around freezing to start the week. By the end of the week, average temperatures will rise to a 30-year trendline of about 36 degrees Fahrenheit but then start heading lower into early December.

For East Europe, a significant cold snap is shaping up for early December. Temperatures are expected to average 15 degrees Fahrenheit by Dec 6 versus an average of around 25 degrees.

A similar drop in average temperatures is expected early next month for Nort West Europe.

The good news is that EU countries have reached a Nov 1 target to fill natural gas storage sites by 80%. As of Monday, current levels stand at 95% due to unseasonably warm weather squashing heating demand, along with a push by EU countries to curb demand through conservation measures.

On a seasonal basis, EU NatGas levels are well above a 12-year mean, though the drawing period has begun.

Bloomberg noted the new weather forecasts boosted power contracts for December for France and Germany, up more than 16% and 13%, respectively, on Monday. After months of decline, power prices in both countries could be set for an incline as cold weather sets in.

EU NatGas prices were slightly higher and have shown signs of a potential bottom after plunging by more than 63% since the August high.

Carlo Buontempo, director of the Copernicus Climate Change Service at the European Centre for Mid-Range Weather Forecasts (ECMWF), told Politico in mid-October that the probability was rising of a cold spell this year — most likely in December — remains “very real.”

Some on Twitter are pointing out that winter is just ahead.

“By Dec 6, Europe is submerged in deep cold air down to Spain and North Africa. Something we have not seen in decades,” one Twitter user said.

#natgas
By Dec 6 Europe is submerged in deep cold air down to Spain and North Africa. Something we have not seen in decades. pic.twitter.com/KnifLysqlQ

Another user said winter and recession could be a toxic combination for the continent.

🇪🇺 Markets forecast a short and shallow #recession in #Europe.

Needless to say, these forecasts hinge on feeble assumptions of mild #winter temperatures.

Indeed, the looming recession will be as deep as the incoming winter gets cold.

And the winter can be nothing but freezing! pic.twitter.com/perULWhWq8

However, someone else said the cold spell is not that unusual for this time of year.

I spent my career producing these charts, interpreting these charts and advising the emergency response community what these charts mean. You are wrong. These temps are not unusual have happened recently and you cannot make a deterministic statement from a probabilistic forecast

The new forecasts are a bullish development for EU NatGas prices as heating demand ramps up.