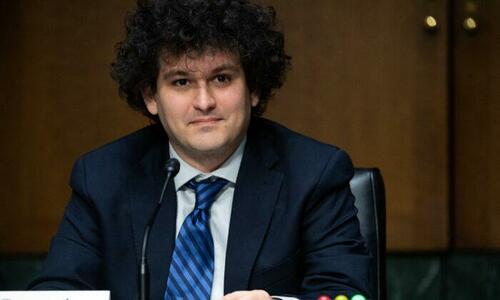 Authored by Andrew Moran via The Epoch Times (emphasis ours),

Samuel Bankman-Fried, founder and then-CEO of FTX, testifies during a Senate Committee hearing about Examining Digital Assets: Risks, Regulation, and Innovation, on Capitol Hill in Washington, on Feb. 9, 2022. (Saul Loeb/AFP via Getty Images)

Is there a questionable relationship between Sam Bankman-Fried’s bankrupt FTX, Ukraine, and the Democrats? In the aftermath of the collapse of the cryptocurrency exchange, new questions are being raised surrounding these connections, from crypto partnerships to the billionaire’s contributions to Democrats.

But is there something behind the curtain or was it a group of young people in over their heads?

It All Begins with ‘Aid for Ukraine’

In March, the Ukrainian government established a crypto donations website, allowing Kyiv to convert digital token contributions into fiat money that would be deposited at the National Bank of Ukraine. The Ukraine government maintained a goal of $200 million. By October, it had raised more than $60 million.

The contributed funds have been used to purchase everything needed for the war effort, such as digital rifle scopes, medical supplies, field rations, fuel, military clothing, and other critical items.

The initiative, known as “Aid for Ukraine,” garnered the support of FTX, staking outfit Everstake, and Ukraine’s Kuna exchange. It has been powered by the Ministry of Digital Transformation.

“At the onset of the conflict in Ukraine, FTX felt the need to provide assistance in any way it could. By setting up payment rails and facilitating the conversion of crypto donations into fiat currency, we have given the Central Bank of Ukraine the ability to deliver aid and resources to the people who need it most,” Bankman-Fried said in a statement in March. “We are grateful for the opportunity to work with Sergey [Vasylchuk] and the Everstake team as they continue to work tirelessly in helping Ukrainians as they suffer from this conflict.”

Days after the launch of the Ukraine–FTX collaboration, U.S. President Joe Biden announced an extra $800 million in security assistance to Ukraine, bringing the total contribution to $2 billion since the start of the administration. In total, it’s estimated that the United States has given more than $60 billion to Kyiv.

Bankman-Fried was the second-largest Democratic donor for the 2021–22 cycle, donating $39.8 million. This was behind George Soros’s total donations of $128 million. Bankman-Fried gave the most amount of money to the Protect Our Future PAC, a group that “endorsed Democratic candidates such as Peter Welch, who won his bid to become Vermont’s next senator, and Robert J. Menendez of New Jersey, who secured a House seat,” according to Fortune. But this past summer, Bankman-Fried suggested that he could’ve spent $1 billion on the midterm elections to support the Democrats, although he stepped away from this proposition.

Mark Wetjen, the head of policy and regulatory strategy at FTX, who served as a commissioner on the Commodity Futures Trading Commission (CFTC) under former President Barack Obama, also attended some of the meetings.

Visitor logs also show that Bankman-Fried’s younger brother, Gabe, made visits to the White House on March 7 and May 13. His first appointment was with Nathaly Maurice, special assistant to the president and director of partnerships at the White House. His second visit was with Butash.

Gabe had previously worked as a Capitol Hill staffer and is the founder and director of Guarding Against Pandemics.

Bankman-Fried has been open about his attempts to influence public policymaking, explaining that he’s championing crypto regulations, including legislation that would codify licensure for crypto assets. The bill, the Digital Commodities Consumer Protection Act of 2022, was proposed by Senate Agriculture Committee Chair Debbie Stabenow (D-MI) in August. A key aspect of the legislative pursuit is that it would allocate crypto regulatory power to the CFTC. Bankman-Fried donated $5,800 to Stabenow’s campaign in February.

“One in five Americans have used or traded digital assets—but these markets lack the transparency and accountability that they expect from our financial system. Too often, this puts Americans’ hard-earned money at risk,” Stabenow said in a statement. “That’s why we are closing regulatory gaps and requiring that these markets operate under straightforward rules that protect customers and keep our financial system safe.”

So everything that has transpired between Bankman-Fried, FTX, Ukraine, and the Democrats has raised some eyebrows. Billionaire CEO Elon Musk is also intrigued by the latest developments.

“Was FTX being used to launder money for the Democratic Party?” a Twitter user asked.

Musk replied, “A question worth asking.”

Alex Bornyakov, the deputy minister of Digital Transformation of Ukraine, took to Twitter on Nov. 14 to dismiss this “narrative.”

“A fundraising crypto foundation @_AidForUkraine used @FTX_Official to convert crypto donations into fiat in March,” he tweeted. “Ukraine’s gov never invested any funds into FTX. The whole narrative that Ukraine allegedly invested in FTX, who donated money to Democrats is nonsense, frankly.”

Is there truth to any of the speculation that Ukraine funneled money to Biden through FTX or that there was anything iniquitous in the Ukraine-FTX partnership?

A cryptocurrency expert, who wished to remain anonymous, told The Epoch Times that there isn’t much credence to the suggestions. Although Bankman-Fried was a significant Democratic donor, the downfall of FTX was because of mismanagement, poor decision-making, and a lack of experience and corporate controls. It was an enormous financial firm that was run by 20-somethings.

The other factor was that FTX’s assets were denominated in volatile cryptocurrencies, and many of these tokens’ valuations crashed in 2022. FTX’s balance sheet, which was obtained by the Financial Times, shows that its assets were comprised of joke coins or unreliable tokens, including TRUMPLOSE, the Brazilian Digital Token, Oxygen (OXY), and FTT (FTX’s native coin).

In recent months, FTX has been acquiring troubled assets throughout the crypto and tech industries. In May, Bankman-Fried revealed a 7.6 percent stake in Robinhood, but the value had tumbled by more than 5 percent since the purchase.

It has been a year of turmoil for a wide array of crypto firms, such as Coinbase, crypto lending firm Celsius, BlockFi, and Singapore-based crypto trading platform Three Arrows Capital—which Bankman-Fried bailed out with a $750 million credit line.

“We’re willing to do a somewhat bad deal here if that’s what it takes to sort of stabilize things and protect customers,” he said in June.

The FTX scandal will likely have a domino effect in the sector. BlockFi, a crypto lender, revealed that it had large exposure to FTX. The Wall Street Journal also reported that BlockFi is exploring a bankruptcy filing, citing people familiar with the matter.

There’s growing concern that Gate.io and Crypto.com could be the next two giants in the crypto ecosystem to experience financial troubles.

London Mayor Unveils “Crippling” Vehicle Emission Charge For All Of London, Despite 80% Opposition

London Mayor Unveils “Crippling” Vehicle Emission Charge For All Of London, Despite 80% Opposition