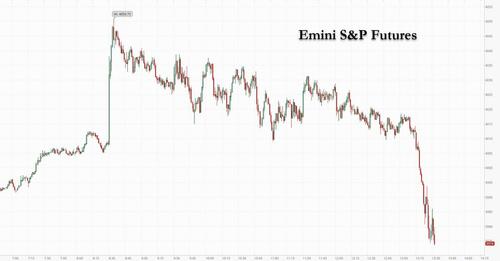 Are we about to test Art Cashin’s thesis that you should never bet on the end of the world (i.e. sell stocks as the ICBMs start flying). As a reminder:

Art Cashin, the dean of the NYSE floor, told a story on Tuesday at Barry Ritholtz’s Big Picture conference in midtown that illustrated this point perfectly. It was in the days before the Cuban missile crisis. Mr. Cashin was a young trader. One day a rumor mushroomed that the Russians had launched their missiles. World War III was starting. Mr. Cashin ran across the street to find the best trader he knew – who was in a bar having a drink. Mr. Cashin ran in breathlessly, hardly able to talk.

“Stop,” the trader said. “Have a drink. Explain everything.” After hearing all the information, the trader had one order: “Buy. Don’t sell. Buy.”

“Because if you’re wrong, the trade’ll never clear. We’ll all be dead.”

Well, moments ago futures ignored the venerable market strategist’s words and tumbled after a report from Polish Radio ZET according to which two stray rockets fell in the town of Przewodów on the border of NATO-member Poland with Ukraine (while unreported, the prevailing assumption is that the rockets are Russian).

The rockets reportedly hit the grain dryers, leading to two casualties. The police, the prosecutor’s office and the army are on site.

Prime Minister Morawiecki convenes an urgent meeting of the Committee of the Council of Ministers for National Security https://t.co/WGaNBIbox6

And as Bloomberg also confirms, Polish Prime Minister Morawiecki has convened an urgent meeting of the Committee of the Council of Ministers for National Security.

The news has sent futures tumbling.

It will be amusing when reputable news sources deny the whole thing but for now, stocks are dumping and are red on the day after soaring more than 2% earlier.

‘Negative Efficacy’ Should Have Stopped COVID Vaccine Recommendations In Their Tracks

Law-Abiding Americans Had “Strong Appetite” For Guns On Black Friday

‘Negative Efficacy’ Should Have Stopped COVID Vaccine Recommendations In Their Tracks

Law-Abiding Americans Had “Strong Appetite” For Guns On Black Friday

Deja Vu All Over Again: China’s Auto Industry Is Once Again Shuttering Some Operations Due To Lockdowns